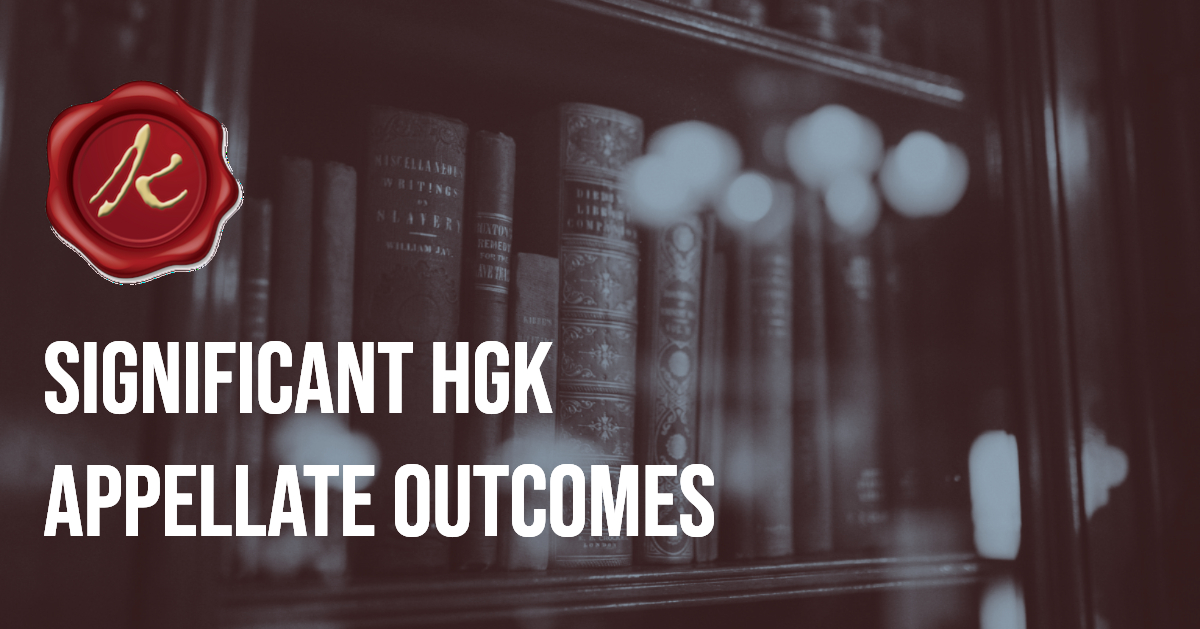 From time to time I will issue two types of appellate Case Law Notices for benefit of clients and friends.

Today's Case Notice covers two cases of the first type; "Significant HGK Appellate Outcomes,” i.e., my own case outcomes seen as significant or interesting even if they do not result in full written opinions but "per curiam, affirmed” (PCA) opinions. Full written opinions in my cases, constituting binding precedent, are usually worth my noticing (sneak preview: one such opinion was just issued: I’ll report on it as it becomes final), but only selected PCAs will be shared, based on unique facts or trial holdings (or, as is the case with one of today's two cases; industry bullet dodged!).

The second category of case notices will be "Landmark Alerts; those occasional new cases, regardless of origin or court, which must be understood if one is to to function fully within Florida’s Workers’ Compensation program, along with my thoughts on their meaning and projected impact. (Sometimes a case comes out that is so interesting, but not quite landmark status, that I’ll issue a "Semi-Landmark Alert.")

Here then is today’s Notice!

The case: Decision to controvert based on misrepresentation involving a claim -- and an employee -- of this kind is NOT made lightly: Employer/Servicing Agent, through able trial counsel, brought numerous witnesses from across the state and put together a trial book documenting some 80 specific instances of alleged misrepresentation in a case investigated and fiercely defended for several years (2007 date of accident!). E/SA alleged Claimant continued running his substantial fire equipment business while claiming totally incapacity (not without medical support).

The Appeal: JCC focused denial on only a few very specific and arguably minor misrepresentations (compared to others alleged).  Claimant appealed, seeking to exploit vulnerabilities in those very specific findings.  E/SA and estimable trial counsel entrusted the undersigned with this most challenging referral.

Sensing possible weakness in those determinations, a rare tactical decision was made to file cross-appeal (i.e., despite "complete" win), suggesting JCC erred in not "also" denying on numerous other grounds alleged (and "tipsy coachman" doctrine would not suffice as defense in direct appeal in that "new" findings were required, whereas that doctrine permits affirmance only on other grounds/findings already present).

In short: with 11,400 page record (second largest encountered in my career); a unique strategic cross-appeal; six figure investigative and legal costs by E/SA (and similar investment by Claimant’s esteemed trial and appellate counsel), this was a "five alarm fire" appeal for all concerned.

OUTCOME: In unanimous opinion the DCA (Judges Lewis, Ray, and M. K. Thomas) affirmed JCC denial based on the limited grounds found appropriate for denial by the JCC (and cross-appeal was thereby rendered redundant).  A full opinion would have made fascinating reading, but the “PCA” outcome was a great relief to the E/CSA (and undersigned).  I am honored to have been given this opportunity and very gratified to have helped bring about this result.

The case: E/SA and defense counsel had their hands full with this ‘seemingly’ minor electrical burn case which took on a life (and a death) of its own, including numerous alleged injuries, some "accepted," some not: however, following death of initial treating physician, suffice it to say things got complicated, leading finally to Claimant electing unauthorized major spinal surgery with bad outcome.  Claimant "returned" to WC, claiming new neurologist on grounds initial neurologist never properly discharged him (and unfortunately passed away).

The appeal: JCC denied the multifaceted claim and Claimant appealed.  Estimable trial counsel Robert Rodriguez and E/SA entrusted the undersigned with this also-challenging referral.  Appeal was made complex given several unique facets including validity of initial MMI; competency of witnesses to testify; medical necessity; and especially the 120-day pay-and-investigate rule vis-à-vis E/SA's affirmative defense of "break in the chain of causation" based on unauthorized surgery.

It is the undersigned's personal belief the 120-day rule has become unwieldy as presently construed -- arguably in conflict with prior constructions -- creating a great deal of litigation beyond its argued intended purpose and every new case poses a risk of inflaming or ameliorating that perceived state.  Nevertheless, this "break in the chain of causation" case presented a classic and well validated basis for trumping operation of the "pay and investigate" cut-off of an E/S AA's right to suspend benefits.

The outcome: In a unanimous per curiam affirmed (PCA) opinion the DCA (Judges Lewis, Rowe, and Makar) affirmed JCC denial.  Again, it would've been interesting to read the court's assessment of these facts and the particularly strong "break in the chain" defense to operation of the 120-day rule, but again: a win is gratifying, per se.  I honored to have been given this opportunity and gratified to help bring about this result.

HGK NOTES: Emphasis was made in the winning brief to two older cases with which the undersigned is proud to have been associated: first, Timothy Bowser Const. Co. v. Kowalski, 605 So.2d 888 (Fla 1st DCA 1992) both tried (unsuccessfully) and appealed, successfully, by the undersigned and holding: expert’s testimony of supposed "medical necessity" will not ‘immunize’ award of van, home extensions, etc. when exposed on appeal as based on mere personal proclivities of expert regarding what is "necessary."  Second case; Broward Indus. Plating, Inc. v. Weiby, 394 So.2d 1117 (Fla. 1st DCA 1981); early case holding, inter alia, E/C not responsible for unauthorized medical care and, it follows, untoward consequences of same.