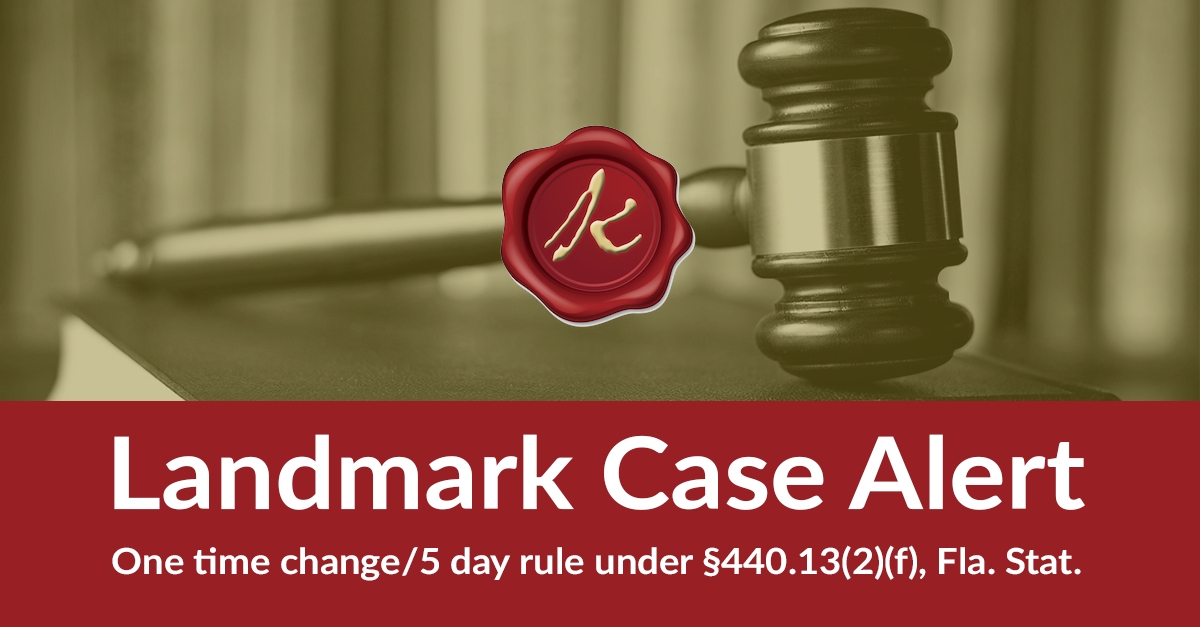 Subject:   ‘One time change/5 day’ rule under §440.13(2)(f), Fla. Stat
Disruption Factor:  Mild – for now – pending Supreme Court construction on Certified Question
Upshot:   Modification (but not radical change) in construction of E/C’s responsibility to act, for now.
Status;   Not final till rehearing period expires, but more important: case is certified to the Florida Supreme Court as a “question of great public importance.”
City Of Bartow and Commercial Risk Management v. Isidro Flores,  Case number 1D 18-1927.
What Happened:
Late in the day on the last day in May, Florida’s First District Court of Appeal certified a question of great public importance to the Florida Supreme Court following its own modification of existing interpretation of the one-time change/5 day rule under §440.13(2)(f), Fla. Stat.
Facts:
Long story (17 page opinion) short: claimant asked for one-time change and E/C counsel promptly wrote namingnew physician and advising it would get to work on an appointment, thus far in perfect keeping with the law.   It is important to add: the letter advised of deauthorization of then-current treating physician (I would interject: as they say, bad cases make bad law, and this fact likely contributed to the outcome).
Despite communications back and forth, and E/C counsel averring the doctor's office wanted to review records etc., 29 days later claimant filed PFB naming his own physician, and then - 63 days after request and 56 days after E/C's receipt of it – E/C notified claimant of appointment.  Claimant rejected it went to hearing seeking his own choice.
The JCC found as a matter of (disputed) fact E/C did little for about a month before finally advising claimant of appointment 56 days after notice. Claimant was made to endure an “unreasonable delay,” without care, until E/C’s attempt to "provide" an alternate physician, and so forfeited its right of “selection.” E/C appealed. The Court affirmed.
The Court's analysis in short:
For the Very Interested:
The dissent argues: in keeping with E/C's contention, there is no due date written in the statute and therefore -- even though 56 days had gone by with no treatment – – the court was not empowered to write one in.
HGK’s Analysis: It could have been worse.  The result, so far (see Supreme Court note below) is not different from old cases (before miles were added to statute) that hold: offering a physician too far away is equivalent to not offering any (allowing Claimant’s choice to stand).
Link to case: https://www.1dca.org/pre_opinion_content_download/636687
Because rehearing is possible (within 15 days) and because Supreme Court intervention is likely (but not a certainty), watch this space for further details!
In the meantime, everybody, please be and stay safe!
Of continuing interest, HGK’s Workers’ Compensation Questions for A Pandemic.
Scroll to Top